Spiralling top-level valuations have lifted Championship valuations by an average of £15 million, national league players by £2.4 million, and overweight blokes on Hackney Marshes by £750,000.

Centre-back Roy Hobbs, aged 47 and weighing 17 stone, said: “Putting in a few strong clearances on a Sunday morning is my way of working off a hangover.

“So it came as a surprise to find that I’m valued at £800,000 and being scouted by 1461 Trabzon in the Turkish League as a utility player to keep them in the play-off places.”

Van driver and White Hart Academicals goalkeeper Norman Steele said: “My agent says I could retire with a move to the J-League, but I take all the hysterical press speculation with a pinch of salt. 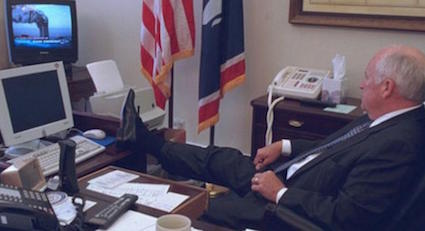 PHOTOS from inside the White House on September 11th 2001 show Dick Cheney looking exactly as you would expect if the conspiracy theories were true.

The former vice president is shown yawning, smirking and with his feet up on his desk. Experts have suggested this could be seen as inconsistent with someone who was incredibly surprised and angry.

Professor Henry Brubaker, from the Institute for Studies, said: “At the very least, it’s almost as if he immediately saw the advantages accruing from a mass terror attack on the US and became very chilled out by the prospect.

“It’s almost as if he had some kind of game plan that he had been refining over several years. Or maybe not. It’s just a theory based on some photographs of his actual face.”

Cheney said: “I always put my feet on the desk when I’m in a state of total shock.

“And I yawn when I’m filled with adrenalin and a burning desire for revenge.”