THE debate over whether Leicester’s Jamie Vardy should start on the left of a three-man attack has left the nation sharply divided.

Weeks of increasingly bitter argument have seen half the nation demand that Vardy be played as a wide forward in an adapted 4-3-3, while the remainder insists he is most useful coming off the bench to run at tired defences.

Anti-Vardy spokesman Bill McKay said: “All experts agree that Vardy is best as a substitute. Daniel Sturridge should start against Iceland, and anyone who denies that is intentionally misleading the public.”

Pro-Vardy opponent Tom Booker said: “We should have faith in our traditional, old-fashioned strikers. I’m being made a pariah just for speaking my mind.”

The row has ended friendships and divided families. Booker’s partner Janet said: “I mentioned that Vardy was yet to prove his class at international level and Tom told me I’d been brainwashed by pro-Liverpool elites.

“When I tried to argue that Vardy had only had one good season, Tom said I was betraying the land my ancestors fought and died for.

“I just hope all this is over soon, and we can all come together over how Ross Barkley is a waste of space who shouldn’t be near the squad.” 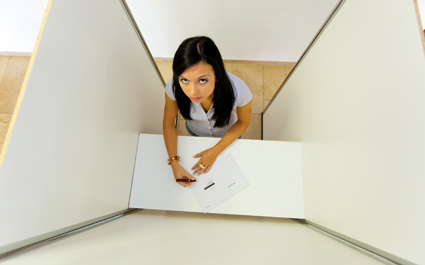 THE referendum ballot paper includes an option for voters whose priority is not upsetting their friends, officials have explained.

Voters can ignore the ‘Remain’ and ‘Leave’ boxes and simply put a cross next to ‘How my friends voted’ if they just want to fit in and not risk losing popularity.

Referendum official Donna Sheridan said: “It became apparent that many voters were too spineless, gormless or lazy to form their own opinions.

“As a result we’ve offered a third choice in which our computers record your vote as however your friends have voted. If their opinions are divided, it just copies the most gobby ones.

“This option has the advantage of preventing tension in households, workplaces and pubs because it enables you to go with the flow, like a sheep in a lorry going to the abattoir.”

Office manager Roy Hobbs said: “If I have my own opinion it might be different to my friend Geoff and he’ll say I want 10 million immigrants to come here.

“But if my friends all vote remain and I don’t they’ll say ‘D’you want people to lose their jobs?’, but what I really want is to not think about it at all.

“So after careful consideration I’m voting how everyone else votes. You won’t change my mind because I’m sticking to my decision, whatever it is.”