Fan with ‘Wenger Out’ banner sick of Arsenal winning

A DISGRUNTLED Arsenal fan is tired of bringing his ‘Wenger Out’ banner to games that the Gunners win.

Supporter Stephen Malley had to hide the banner under his seat after Arsenal’s tenacious comeback against Manchester City and admitted he might as well have left it at home for their victory over West Ham.

He said: “Sixty quid this cost me. I’m beginning to think it’s cursed.

“I bring it along, furled and ready, but the minute I get it out we score and I have to pretend it’s a haemorrhoid cushion.

“Don’t get me wrong, I’m still fully behind the sentiment, but it’s hardly going to get a rapturous reception from the crowd when we’re two-nil up and cruising, is it?

“I’ve given this club my heart and soul for 30 years. Is it too much to ask for them to lose the next few games?”

Arsenal striker Olivier Giroud said: “It gives the players such a boost to know that win, lose or draw we can count on our fans to be there, calling for the dismissal of our manager. That’s true support.”

Anywhere without ‘No Fly Tipping’ signs fine for fly-tipping 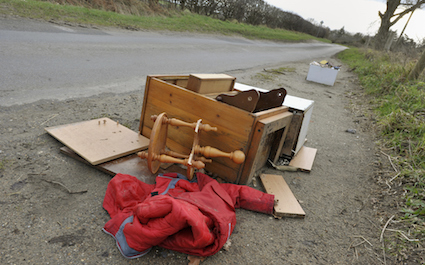 ANY lay-by, alleyway or domestic garden that does not display a ‘No Fly Tipping’ sign is open for fly-tipping, local authorities have confirmed.

Filthy mattresses, broken fridges and builders’ rubble can now legally be tipped anywhere further than 10ft from a sign prohibiting it, including rivers, parkland and sites of outstanding natural beauty.

“If you don’t want fly-tipping then put a sign up. If you haven’t got a sign up, then the fire-damaged three-piece suite I’m getting rid of has a new home in your parking space.

“Congratulations to the councils for cutting through the red tape strangling the self-employed small businessman.

“Just chuck that telly out the van while I’m driving. It’s fine, there’s no signs on the motorway.”