In a passionate outburst on Sky Sports Benitez said: "Hwhen joo do dat to footballers like he said aybout Leeds and hwhen joo do tings like dat aybout a man like Stooart Pearce.

Close to tears, Benitez added: "Hwe hev not resorted to dat but hi wheel tell joo – joo can tell heem now eef joo are hwatching eet – hwee are steel fighting for theese tytel and he has got to go to Middlesborough and get someting.

Benitez resigned shortly after the interview but was persuaded to return by the Liverpool board.

He is expected to resign and be reinstated another 14 times between now and the end of the season, before being admitted to a special hospital.

Meanwhile Sir Alex Ferguson said last night: "I don't know what his problem is. What I do know is that Spanish men have incredibly small penises. That's a scientific fact."

Emma Thompson To Decide Where You Go On Holiday 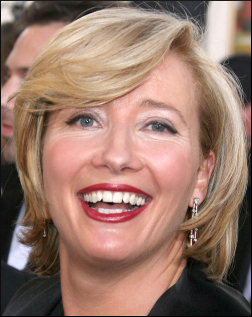 OSCAR winner Emma Thompson is to chair a new committee which will decide where you spend your summer holidays.

The Thompson committee will publish a list of approved holiday destinations in January each year along with a recommended mode of low carbon transport.

Thompson, who swims to all of her filming locations around the world, said: "I had the idea while I was swimming the Atlantic en route to the Golden Globe awards in Beverly Hills.

"I phoned Stephen Fry for advice but he said he couldn't talk because he was in New Zealand making a documentary about parrots. I said 'I hope you swam there' and he assured me that he had."

She added: "Unless you're a very good swimmer, like me, I'm afraid your choices will be rather limited.

"For 2009 we're looking at Widnes, Harrogate and Dundee. We've also got two weeks on a park bench in Port Talbot, working your way through a meat paste sandwich while it absolutely pisses down.

"France is really only available to strong swimmers, and if you are planning to travel on to the Dordogne you will have to allow for an extra eight weeks walking time.

"Or you could just stay at home and watch me and Will Ferrell in Stranger than Fiction which we filmed in the magnificent city of Chicago. That was a lovely swim."