REFEREE Howard Webb is to be used by police by ignoring his opinion on everything.

Following his performance in yesterday's Manchester United v Liverpool match, detectives have decided that Webb could be reliably wrong about any given situation he was presented with.

He will be asked to read the alibis of suspected murderers and if he says their story sounds feasible, they will be arrested immediately.

Chief Inspector Norman Steele said: "We showed Mr Webb photos of OJ Simpson and he asked whether he could introduce him to his sister.

"While this was going on, the radio was playing Robbie Williams' latest single in the background and he remarked how catchy it was. He is perfectly wrong about everything."

City workers are also said to be interested in Webb's negative predictive capabilities, with one investment bank hoping to link their traders' portfolios directly to his opinions.

Julian Cook, chief economist at Donnelly-McPartlin, said: "How could it possibly be worse than any of the other methods we use?"

Webb became a referee after his investments in Betamax video and Will Mellor's pop career foundered, while his progress in Sunday League football got off to a shaky start as he would invariably arrive at Hackney Marshes on a Saturday and book everyone on both teams for bringing the game into disrepute by not turning up.

But his rise to Premiership status was due to a loophole in clause five, paragraph 14, subsection three of the Football Association's refereeing code which states that a twat can do it.

But Liverpool coach Rafael Benitez admitted that United should have been awarded a controversial penalty, adding: "On the last Sunday of every eighth March, Sagazan the Unfathomable must be appeased with a penalty for an event that occurred well outside the area.

"I remember seeing Howard award one for an illegal kickoff in the central circle once."

He insisted: "Oh, don't worry, I am vaguely aware of just how bat-stranglingly mental I am, but you've really got to tip your cheese hat to somebody at his level of wrong."

MPs Claim Expenses For Getting Caught At Being Whores 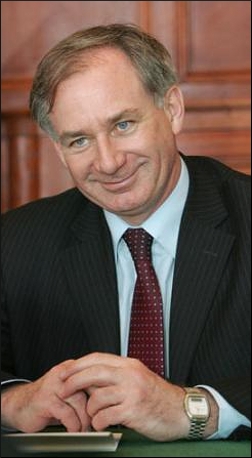 FOUR Labour MPs have claimed expenses for getting caught offering to peddle their influence to the highest bidder like common whores.

Stephen Byers, Patricia Hewitt, Geoff Hoon and Margaret Moran have all submitted claims for around £3000 each, covering the cost of answering the phone to journalists and a new wide screen television so they can watch themselves getting caught, as well as the customary selection of luxurious bath products and emergency double glazing.

Byers, who was caught on film during a sting operation, said that he was 'a bit like seaside donkey waiting to be ridden', while Hewitt told the undercover reporters that she did 'happy endings but no kissing'.

The former defence secretary Geoff Hoon told the reporters that he still could not believe that other people were willing to pay him to do things given the fact that he is 'after all, incredibly Geoff Hoon'.

Former transport secretary Byers claimed he controlled a network of invisible spies inside his old ministry and could make all the planes fall out of the sky at the same time; former health secretary Hewitt told a paracetamol company she could make everyone's headaches last longer, while Luton MP Moran claimed she could 'probably dig out the switchboard number of the department of trade and industry, or whatever it's called these days'.

The scandal could damage Labour's election campaign by undermining the party's hard-won reputation as wise and principled public servants who have always put the country before their own political or financial interests.

Meanwhile a Downing Street source said the fact that the three former ministers at the centre of the scandal are all high profile critics of the prime minister was 'obviously nothing more than a coincidence, if you believe in that sort of thing'.

The source added: "And if anyone else wants to make trouble I'm sure we could coincidence the fuck out of them as well."