The veteran was brought on in the 67th minute to sing backing harmonies on a few album ballads but his contribution was drowned out by the screaming of middle-aged male Leicester fans.

Phillips said: “Singing heartfelt lyrics about chaste romance written by teams of Scandinavians has always been a key part of my game.

I actually had trials for Take That as a teenager, before the football took off, and Ive continued gazing into the camera while professing eternal devotion in my own time.

Sometimes, to entertain the lads, Id do a few uplifting ballads in the shower after the game, crooning them into a bar of soap.

Observers said the 40-year-old performed creditably but messed up a crucial step-forward at a key change, leaving the team struggling to present a united front while swearing their love would always be true.

Now if youll excuse me, I need to go home and finish my slash fiction about his torrid secret relationship with Paul Konchesky. 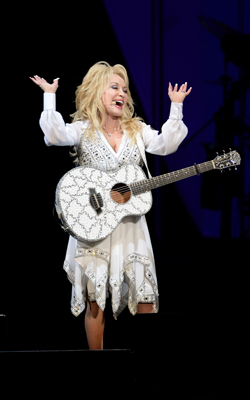 DOLLY Parton has been contracted to play just the bit of 9 to 5 that everyone knows for the duration of her Glastonbury set.

The country star will sing the line about pouring herself a cup of ambition before moving straight into the middle of the song.

She will be allowed to dance on stage, as long as her footwork is  straightforward enough for a layperson to replicate after eight pints of cider.

A Glastonbury spokesman said: “This contract will stop any punters from getting bored and throwing cans of Carling at her head.

“We’ve also had to warn her not to talk about her children’s literacy programme, otherwise the crowd will get restless and leave to get their faces painted or to see if there’s anyone you can still buy M-Cat from.”

Festivalgoer Nikki Hollis commented “Acts should be forced to sign contracts like this. When I saw Blondie at Latitude, they were shit – they didn’t play the one song I know, I Touch Myself.

“We had been really looking forward to hearing it. Blondie should listen to her fans, and do her research.”

Dolly Parton said: “I am thrilled to be playing Glastonbury, and happy to sign anything as long as I get a Winnebago to put my wigs in.”