BRENDAN Rodgers has admitted that allowing his team to leave Selhurst Park after 79 minutes to avoid traffic was a mistake.

Liverpool manager Rodgers made the decision when his men appeared to be on top with a 3-0 lead, but things swiftly turned around after they left.

Rodgers said: “In hindsight it was an error to withdraw my side in a bid to get a smooth run up the M1.

“But it can be a nightmare getting out of south London, especially when there’s football on.”

Palace visibly grew in confidence and enjoyed the majority of possession in the last 11 minutes, regularly finding space on the otherwise empty pitch.

Rogers admitted: “When we put the radio on and heard Palace had pulled it back to 3-2, I sensed we might be in trouble.

“It’s amazing how powerless you feel as a manager sometimes, especially when you’re at Newport Pagnell Services queuing to buy a Twix.”

All training to be done as a montage 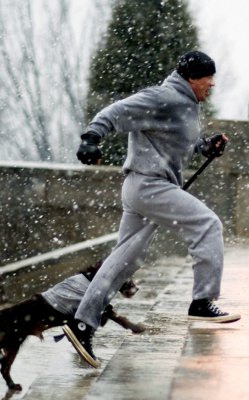 THE government has announced a switch to montage-based training like in Rocky and The Karate Kid.

Montage training takes around three minutes and involves doing a number of vigorous activities to a soundtrack of anthemic rock.

A spokesman for the Department of Work and Pensions said: “It takes nine weeks to train an RAF airman before they’re even allowed near a plane.

“But with montage training, they can be in the air doing a barrel roll by the key-change of Westlife’s Flying Without Wings.”

Legal clerk Eleanor Shaw said: I was dreading my diversity training, even though you get a free sandwich buffet.

But no sooner had it begun than I was high-fiving and building a water-powered rocket with a multicultural team to Ebony and Ivory, ending up with my arm around Vishala from customer relations.

But graduate Tom Logan opposes the policy: They say university is the best three years of your life, but for me it was over in the duration of Alice Coopers Schools Out.

In the montage I pulled all-night essay sessions, got drunk while arguing about philosophy in the college bar and ran across the quad wearing nothing but a mortar board.