Mickelson praised for not thanking Jesus

Mickelson rejected American sporting tradition by thanking only his family, his actual caddy and the people who make his golf clubs, in a victory speech described as ‘not even remotely embarrassing’.

Golf fan Roy Hobbs said: “There was a moment when I thought Zach Johnson would win. He’s a dreary American God-botherer who has no business winning at anything.

“But then he fucked it up, so thank you for that, Jesus.”

Tour de France winner accused of not being Bradley Wiggins 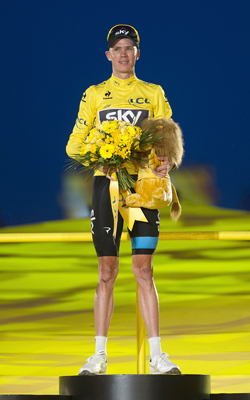 THE British winner of yesterday’s Tour de France is not Bradley Wiggins, it has been claimed.

Close examination of the winner revealed him not to be the only cyclist that everyone knows, but another person without sideburns, probably called Paul or Ian.

Father-of-two Roy Hobbs said: “When I saw that Britain had won the Tour de France, I yelled ‘Go on Wiggo!’

“But after a closer look I was like ‘Who the fuck’s that?’

“Fair play to this bloke I suppose, but I can’t help feeling a bit annoyed that I have to make room in my brain for the identity of another professional cyclist, one who even lacks memorable hair.”

Carolyn Ryan, who has an average amount of interest in cycling said: “Without a unique hairstyle he may as well be a giant pair of muscular legs without an upper body.

Also, Bradley cycled backwards across the finish line in Paris while firing two pistols into the air and yodelling Jerusalem, then bunny-hopped up to the winners podium with a line of can-can girls.

And then he rode through the night all the way back to Britain, arriving moments before the Olympic time trial where he won a gold medal and was joined onstage by The Jam for a killer performance of Going Underground. Thats how I remember it anyway.

“This guy seems like he probably enjoys pedalling more than having exciting fights with greasers on Brighton beach. He’s like Andy Murray, a bit too focused on his sport.