Remi Garde not going to waste inspirational speech on these losers

ASTON Villa boss Remi Garde is to save his inspiring words for players who deserve them, it has emerged.

The former Lyon boss admitted that attempting to motivate his current squad would be a waste of everybody’s time, unless he motivated them to seek alternative careers.

Garde said: “With the right words, almost any player can become a winner, unless that player has ‘Aston Villa’ written on their shirt in impossible-to-erase letters.

“Once I’ve bought them, I’ll tell them how their heroics will lift not just a stadium but a whole city. I’ll tell them how children will be named after them, how statues will be cast in bronze outside Villa Park, how they’ll never have to pay for a drink in this town for as long as they live. 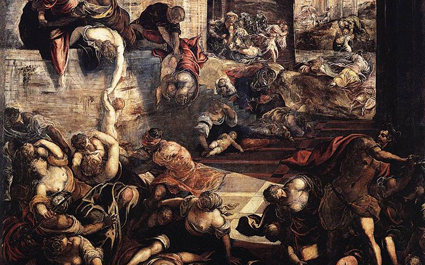 THE Massacre of the Innocents by Jacopo Tintoretto has gone viral after people noticed its similarity to a night on the tiles in Northern England.

Social media is abuzz with the sixteenth-century canvas, which recreates with uncanny accuracy a scene outside a Mancunian nightclub at 3am.

Art historian Emma Bradford said: “The people slumped against a wall in the background look like they’ve just emerged from a large vertical drinking establishment playing charty house music, while a number of contorted figures in the bottom right of the picture appear to be scrapping over a taxi.

“Elsewhere, a number of Jagerbomb-sodden individuals appear to have passed out in a pool of their own fluids, and a man lends a helping hand to his mate who is inexplicably naked. Add in a Greggs or a Sports Direct and this could have been painted last week.

“When studying the picture, it is interesting to speculate on who started the fighting. One imagines they would all blame each other.”