The striker was back to his best after a series of spectacular Â£1200-a-night intercourse sessions with a money-grubbing tart who was obviously going to tell the News of the World the moment he crawled back into his childish car.

It is the England star’s first competitive sex scandal since pumping some fat old skank in the changing room of a Merseyside shell suit boutique in 2004.

Manager Sir Alex Ferguson said: “A lot of people will say that a player of Wayne’s extreme wealth and intense  stupidity should be bedding greasy whores week in-week out.

“I think even Wayne would accept that they have a point, but the fact that this lad was able to do it while his wife was pregnant is genuinely world class.”

The England manager said: “The low point was in South Africa, after the
Germany game, when Wayne attempted a reverse Dutch Steamboat with a
local hooker and ended up fracturing his wrist, losing the remote control and scaring the sweet bejesus out of Peter Crouch.

“For a player of his
abilities this was basic sex trade and I worried he’d have to hang up
his Travelodge loyalty card for good. But that one in the papers? I would beat you to death
with Clive Tyldesley’s just to watch her clean the bathroom.”

Adulterologist Dr Emma Bradford said it was still unclear how
Rooney’s wife Coleen would react but it would almost certainly involve a
shameless amount of money, the repeated use of the words ‘RAT’ and
‘TEARS’ in massive capital letters and then some more money.

She
added: “It’s such a tragedy because they have been together since Wayne
was thinking about having sex with prostitutes as a 14 year-old boy.

“But
unfortunately this is the guaranteed outcome when you hitch your wagon
to an arse-faced millionaire with the brain of a stuffed gibbon.”

Meanwhile some England fans stressed the exposÃ© had once again forced them to imagine what Rooney’s orgasm face might look like.

Usain Bolt To Take Your Job By Next Year 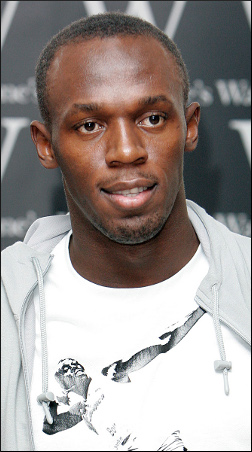 SPRINTER Usain Bolt has indicated his intention to do your job much,
much better than you ever could after first breaking every athletics
record in the world.

The runner plans to undergo a complete sex change before Christmas to dominate female athletics before setting his sights on your flagging career sometime in February.

Britain will then become a Usain Bolt-based economy by 2014, with 80% of the jobs being not only carried out by the Jamaican, but done so with a marked increase in efficiency and insouciant charm.

During initial training he has already exceeded your Excel and Word capability tests, and demonstrated he can construct a 32 slide PowerPoint presentation on information automation integration solutions in under 9.4 seconds.

Bolt’s agent, Jullian Cook, said: “In his first week he’ll have bought everybody muffins, remembered the names of their awful kids and erased the memory of you ever having existed.

“It’s going to be like Trading Places, but a version where Eddie Murphy starts out incredibly rich and successful and then becomes more so while Dan Ackroyd eventualy throws himself off the Sears Tower.”

Bolt said: “Some scientists have said I can’t possibly be in every office in Britain replying to emails and chairing meetings simultaneously. But since I took over the position of every university’s professor of theoretical physics I’ve managed to produce a Grand Unified Theory Of Bolt.

“It explains not only how I can be everywhere at once, but also how I can look like I’m half-asleep while I’m doing it.”