Roundabout traffic flow to be reversed during Olympics

TRAFFIC flow on roundabouts will be switched to anti-clockwise for the duration of the Olympics, the Government has announced.

Officials said the move will ensure the event meets its target of causing painful inconvenience to every single person in the country, not just London.

The new traffic regulation, which will be imposed from July 27 to August 12, means that motorists will have to choose between remembering the Olympics are on or being killed or maimed in a head-on collision.

A spokesman said: “The 2012 annoyance committee realised that having the psychotic logo, the pair of terrifying cyclops monsters and adverts filled with potential heroes was not annoying every last sentient being on mainland Britain.

“This will not only enhance the Great Olympic Celebration but should also increase road traffic accidents by at least 500 per cent. It’s very exciting.”

Signs with the psychotic logo and the five Olympic rings will be erected on every roundabout urging motorists to, ‘Go for Gold – Go the other way round!’.

The spokesman added: “Best of all, the roundabout reversal strategy will cost at least £280 million, pushing the total taxpayer bill for the Olympics ever closer to the £30bn target.”

Tom Logan, from Hatfield, said: “At least I’ll be able to get very excited about the victories of strangers who happened to be born in roughly the same area of the Earth’s surface that I was.”

Take Me Out contestants shot dead after escape from holding pen 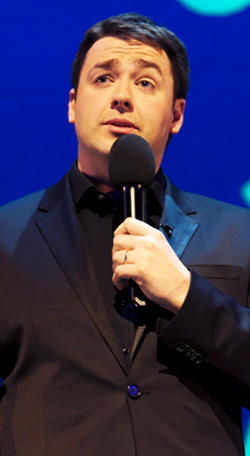 THIRTY-FOUR participants in television rutting event Take Me Out have been killed by ITV rangers after escaping from their secure backstage enclosure.

ITV insiders claim the sexually-voracious humanoids – genetically engineered by the channel to appear in its light entertainment shows – escaped after chewing through the titanium bars of their cage.

A source said: “This was bound to happen. The male and female enclosures were too close together, they would smell each other and get worked up into a frenzy.

“We usually have Jason Manford backstage to keep them quiet with some material about sat navs with funny voices, but last night he got stuck on the motorway.”

He continued: “The females were out first, killing the guard then rutting with his mauled corpse. Shots were fired, and alpha female Geordayna fell dead.

“With their leader down the rest of the females fled through the fire exit, clambering over cars as they disappeared into nearby woods.

“Enraged by the loss of their potential mates, the males were banging the sides of their cage, hooting and hurling faeces.

“Their leader Big D aka the D-Man, instantly recognisable by his funky hair, partly see-through shirt and highly defined abdominal muscles, grabbed a keeper in a headlock and took his cage keys.

“Most of the males were soon recaptured with the aid of electro-prods and pornography. But a small group led by Big D and his friend ‘Quiffster’ left the building.

“Helicopter teams containing ITV rangers were scrambled, putting the creatures down with head shots. Big D was killed while having sex with a swan in the middle of the M5.

“It’s what he would have been wanted.”

Take Me Out is hosted by Paddy McGuinness, who was still a schoolboy when he was discovered by ITV scouts throwing smaller children’s bags onto the roof of the science block.