DUTCH striker Ruud van Nisterlooy is to spend the rest of Euro 2008 standing on the opposition goal-line.

Holland coach Marco Van Basten made the bold tactical shift after it became clear Van Nistelrooy was invisible to both referees and linesmen.

He said: "Invisibility is such a valuable quality in a striker. Especially when he's six foot two and built like a brick shittenhuis.

"This allows you to position him deep inside the six-yard box and when the ball comes anywhere near the goal he just pushes the keeper out of the way.

"It also allows him to intercept pass-backs and knock the ball out of the keeper's hands, before sending it hurtling towards the open goal while everyone assumes they’re witnessing some kind of miracle."

Meanwhile Italy has lodged a formal protest and demanding the Dutch share the secret of their 'invisibility potion'.

Van Basten added: "There's no magic to it. It's very much in the Dutch tradition of 'Total Poaching' where every member of the team is equally good at poaching. 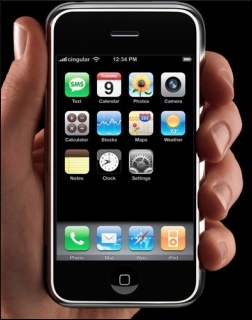 APPLE boss Steve Jobs last night unveiled the new iPhone, insisting there was 'no way' he would launch a better and cheaper version in three months time.

Jobs said the latest 3G iPhone could never be improved on, and definitely not this year, just before Christmas.

He added: "This is the final version. It’s got everything on it, including a little apple symbol, so there's no way a better one will be in the shops by Thanksgiving at the latest for $100 less.

"Listen: the chances of an October launch of a 4G iPhone with double the storage, a better camera, and a keyboard you can actually use, at half the cost of this one are nil. Seriously.

"So if you want one, go out and buy one tomorrow, because we’ve only got a hundred, and when these run out, we’re not making any more."

Wayne Hayes, editor of Core! magazine, said he had ordered his phone already as there was no chance Jobs was holding back information on upgrades or price cuts.

He said: "He has really pushed the iPhone as far it can go this time, just like last time, there is no way he could make it any cheaper or better, and definitely not this year, just before Christmas.

"If he did that, then everyone who rushed out and bought this one would be made to look like a complete dick in a matter of weeks. That is not the Apple way."

However Julian Cook, technology analyst at Donnelly-McPartlin, stressed Jobs was already using a 34G iPhone which he did not plan to put on public sale until 2024.

"By that time he’ll be using a phone that won’t be in the shops until 2038. But you’ll keep handing your money over every time because it’s got a fruit on the back. Dicks."