Wenger did not see Orient match

ARSENE Wenger has refused to comment on Arsenal’s draw against Leyton Orient, claiming not to have seen any of it.

The French Thunderbird puppet was led out of the Brisbane Road ground by Pat Rice whilst wearing a blindfold, following the Gallic belief that anything that cannot be seen has not happened.

Many older French people use the same mehtod to maintain that their country was never invaded by Germany.

Wenger said: “No idea what you’re talking about. I do know we beat Barcelona on Wednesday if you’d like to talk about that. Though I have to admit I didn’t see the first 78 minutes of that game either.”

Wenger’s selective vision has plagued his time at Arsenal and has meant he has no recollection that Francis Jeffers or Manuel Almunia have ever played for the club.

Footballologist Wayne Hayes said a number of managers in the Premier League share Wenger’s belief they can change reality simply by refusing to accept a thing has happened, though psychiatrists warned this could tip them into a Benitez where not only do things not happen but things that have hot happened happen.

Hayes said: “Although Alex Ferguson still attends United matches and takes an interest in them, in his head they’re still playing the 3,750,000th minute of extra time of their 2003 3-1 home defeat to Fulham.

“Meanwhile Sam Allardyce is currently sat in a Lancashire rest home with a blanket over his knees in the belief he’s steering Real Madrid to an historic unbeaten season.”

But Wenger is adamant thaere was nothing to see on Sunday, adding: “If so it would have been on television, would it not? 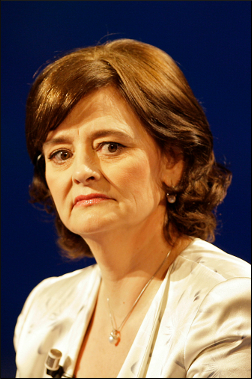 TV CHEF Jamie Oliver forced a group of boys to try and achieve sexual fruition after they had encountered Cherie Blair, it has been claimed.

The alleged incident happened during the recording of the fat-tongued do-gooder’s new series Jamie’s Total Arsehole School, where a group of wayward teenagers is lectured by weapons-grade fuckers including Blair, David Starkey and even Alastair Campbell.

After an introductory session by Blair, the boys were asked for a semen sample by kindly mad professor Robert Winston, who had been tasked with capturing their DNA for the still-in-development series Jamie’s Sperm Chefs.

Tom Logan, 15, said: “As a boy in the prime of teenagehood, I am usually frotting myself relentlessly, like a bonobo monkey possessed by the spirit of Jack Nicholson.

“But after meeting that woman I could do nothing but stare flaccidly into the beaker, trying desperately to form a mental image of Lucy Pinder, Tera Patrick or even Sonia from Eastenders.”

He added: “She looks like Carol Vorderman re-imagined by Tim Burton and after catching her gaze I can feel a gaping hole in my chest where my soul used to be.”

Classmate, Stephen Malley, said: “Since meeting Cherie Blair I haven’t been able to produce any fluid except tears.”

A Channel Four spokesman said: “While we may have to rethink the semen-capture, this programme will still be a fascinating insight into what Britain’s schools could be like if they were staffed by people Jamie Oliver has met at north London dinner parties.”

He added: “Some of these kids have grown up in tough environments where it’s considered cool to be a lying sack of shit with no scruples.

“Alastair Campbell will teach them they can be rich and successful without compromising in any way.”