ARSENAL manager Arséne Wenger has offered to pay in full any bets on his club winning the Premier League.

Following the 2-0 win against Liverpool on Saturday, Wenger told press that he would be “wasting everyone’s time” if he pretended any other club was in with a chance.

He continued: “We’re five points ahead, it’ll be ten by Christmas, and I fully expect us to grab three of the four Champion’s League places at the end of the season.

Mathematically there is still a chance we could lose. But come on. Right now the clubs main focus is the legal challenge that will let our under-16 team enter and win the FA Cup.

Wenger then removed a thick sheaf of banknotes from his back pocket and began dispensing them out to fans whod bet on Arsenal’s league victory, while apologising for making it look so easy.

The club will hold an open-top bus victory parade around the UK following next Sundays game against Manchester United, who under David Moyess management will be relegated if they dont win by eight clear goals.

Moyes admitted that further losses could put them in danger of a historic double relegation, which would send them down to League One or even the Conference North.

Meanwhile Arsenal play Borussia Dortmund in the Champions League on Wednesday, and have already announced that if they win, theyre taking home striker Robert Lewandowski. 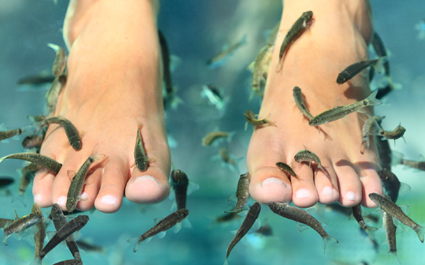 FISH from around the globe are being brought to the UK and forced to eat human foot tissue in sleazy ‘spas’.

Sprat-like fish Emma Bradford was taken from a Croatian island and made to suck pensioners’ verrucas.

She said: “The men who brought me here said if I didn’t eat feet I would be deep fried and served with chips.

“The public seems to think our natural diet is dead skin cells, and that this makes it ok. However most foot spa fish would prefer to eat normal fish stuff, like plankton.

“Who wants to chew some fat guy’s dirty old corn?”