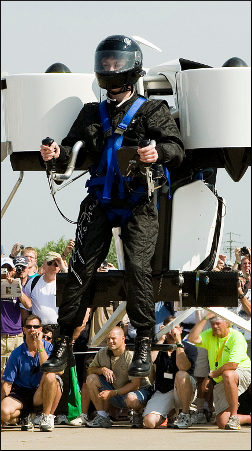 Several of the jetpacks, made by Martin Aircraft and retailing for £50,000, have already been spotted at car boot sales and in branches of Cash Converters.

Jetpack owner Nathan Muir said: "Like most men and quite a few women, owning a jetpack has been one of my foremost life goals.

"How amazing, you'd think, to fly like a superhero, swooping gracefully through fields and valleys as amazed onlookers point and gasp, eyes full of wonder at this perfect fusion of man and machine. But it's actually bollocks.

"Once you've been up and down a bit the novelty sort of wears off, it guzzles fuel and it's kind of a hassle to put it on. There's all these fiddly harnesses that you have to fuck about with.

"And is the landlord supposed to keep it behind the bar for you while you have a pint?"

Roy Hobbs, from Grantham, who spent 18 years on a waiting list for his jetpack, said: "As soon as I strapped it on I realised I didn't look anything like as cool as I'd imagined. In fact, I looked like a sort of Welsh Transformer.

"I launched from the back garden and was immediately pelted with coppers by local kids calling me names like 'Buzz Shiteyear' and 'Roger Bumjet'."

He added "I got really angry and wanted to clout them, but of course by the time I'd found a suitable landing spot they'd all fucked off.