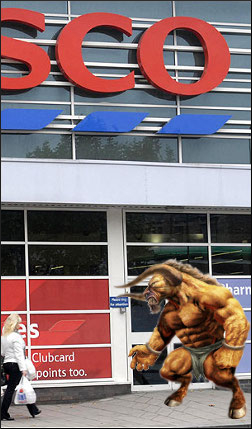 SUPERMARKET giant Tesco claims to have solved the problem of late shoppers by letting Minotaurs loose at 9.50pm.

The company said customers who previously ignored tannoy announcements asking them to proceed to the checkouts are much more co-operative when faced with 15ft of snorting half-man half-bull.

Stephen Malley, manager of the Colchester store, said: “There is nothing better at focusing the mind than witnessing someone being ripped apart by a Minotaur in aisle 16, cereals and canned goods.

“Before there was a slow dawdle, now there’s a stampede. It means we can get on with restocking after we’ve mopped up the guts and eyeballs and stuff.”

Nikki Hollis, an area manager from Merseyside, added: “Our staff are getting home earlier and there are 37 fewer Liverpudlians this week. Win, and indeed, win.”

Tesco said it will now extend the mythical beast customer service initiative, including a Griffin at the end of each checkout that will claw at slow packers with its massive talons, while Scylla the Winged Harpy will pick off anyone who tries to nip back for a box of Tena Lady.

Hollis said: “We’ve actually managed to push up numeracy standards. In our stores five items or less means exactly what it says – or the Cyclops will pull your arms off and then make you count the fingers on each hand.”

But some pilot schemes have been less successful. Cambridge store manager, Helen Archer, said: “Our customers spent 20 minutes debating whether the Minotaur was actually a late adaptation of the Phoenician Baal-Moloch.

“By the time they were finally eaten it had gone quarter-past.”