Thanks For All Your Fucking Help, Says River Mouse

A MOUSE which survived a terrifying ordeal in a freezing river has thanked all the humans who stood on the bank taking pictures with their mobile phones.

Ian Simpson, a three year-old mouse from Carlisle, described the human response to his plight as 'incredibly fucking heart-warming'.

He said last night: "I'd had a long lunch with my mate Geoff and on the way back to work I tripped and fell into the river. So yes, to some degree, it was my fault.

"Anyway, the water was absolutely bloody freezing, meanwhile I'm using my tail and my tiny little claws just desperately trying to grab onto a twig or something.

"Then, all of a sudden, I'm aware of this looming presence so I look up and not two feet away is a mobile phone with some arsehole behind it shouting 'check this little mouse, I think it might drown'.

"I start shouting 'Oi, mate, can you just put down the phone for a minute and grab my tail', but he just carries on taking pictures.

"I know he probably didn't hear me, but to be perfectly honest that shouldn't have made the slightest fucking difference. I was clearly in peril.

Simpson added: "I've no doubt if it had been some kitten fighting for its life they'd have called out the army while the Daily Telegraph cleared its front page.

"But anyway, rant over, I just wanted to say – thanks a fucking bunch. Twats." 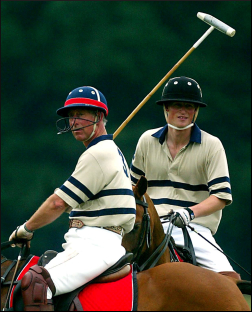 As Britain's Royal Family was once again exposed as a bunch of shits, friends of the Prince say multi-millionaire Kuldip Singh Dhillon loves nothing more than a sound beating at the hands of the future king and his sons.

One source said: "They give him a head start and then chase him round the paddock, waving their mallets in the air and shouting 'run Sooty, run!'.

"When their Royal Highnesses finally catch up to him they swipe at his legs to bring him down and then set about his head and body with blow after affectionate blow.

"Sometimes the beating has to stop for a few seconds because everyone is laughing so much."

The cheerful violence was revealed just days after Prince Harry alienated two-fifths of the world's population and Prince Edward was caught on camera taking a stick to his labradors because they are black.

Constitutional experts now believe Prince Charles may be an evil twin and that a kinder, gentler prince is being held prisoner in the Channel Islands where he is forced to wear an iron mask lest his true identity be revealed.

Royal historian Denys Finch-Hatton said: "The local villagers say that on a quiet night you can hear the poor wretch howling at the moon and shouting 'why? why?'."

Meanwhile the parents of Royal girlfriend Kate Middleton have urged their daughter to break-up with Prince William and start having sex with a footballer.