Glastonbury line-up chosen at random by a cat

THIS years Glastonbury acts were chosen entirely at random by organiser Michael Eavis cat, it has emerged.

The extremely diverse line-up was achieved by allowing the cat, Ozric, to select acts from a list that was read out to him.

Eavis said: Too many festivals go down the predictable route of booking popular acts that people want to listen to.

Instead I made a list of every act I could think of and read them out to my cat. If he responded in any way, like licking his paw or cleaning his anus, they went on the bill.

“And thats why Mumford & Sons are headlining on Sunday.”

He added: “The final line-up was quite eclectic, but I dont think thats a problem. Im sure lots of Dizzee Rascal fans also like Kenny Rogers and I Am Kloot.

“And Ozric did pick out some classic acts like The Rolling Stones, although personally I wouldnt have booked them because I know a Stones tribute band that would have been just as good for £75.

“Its just a shame he ignored U2, Madonna, Pink Floyd, Lady Gaga, Bruce Springsteen, Eminem, The Foo Fighters, Eric Clapton, Beyonce and Bob Dylan, because that would have been quite a festival to remember.”

Festivalgoer Tom Logan said: “The line-up is amazing. Its like a mix of the old and the new and bands you vaguely remember from the 1990s. I just hope Nick Cave doesnt clash with Smashing Pumpkins.”

His girlfriend Donna Sheridan added: “To be honest Im only here to see Bobby Womack.” 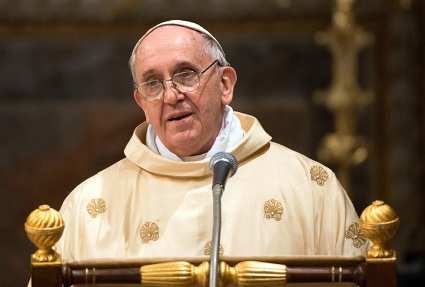 POPE Francis has launched an investigation into the Vatican Bank which will lead inevitably to his mysterious demise.

The Pontiff, who has obviously grown tired of being alive, hopes to emulate his hero John Paul I, who reigned for 33 days in 1978 until he suddenly stopped breathing after asking a lot of annoying questions.

A Vatican spokesman said: “The Holy Father is a great believer in Church tradition and would prefer to die at the hands of a cabal of secret freemasons.

“We’re all very excited about making it look like a heart attack.”