Signalling the start of Labour's fightback, the prime minister is also expected to unveil a radical Susan Boyle-themed reshuffle on Friday with ministers being told to ensure all policies have been Susan Boyle-proofed.

A furious Mr Brown phoned freak-judges Simon Cowell and Piers Morgan on Sunday night to ask what they did to upset Susan and stressing, in the strongest possible terms, that if they made her cry again they would have to deal with him.

The prime minister is now receiving half-hourly updates from Boyle's doctors at the Priory Clinic and has had a CCTV camera installed in her bedroom so he can watch over her as she sleeps.

Dismissing the continued speculation over his own future, Mr Brown insisted he was 'getting on with the job' of reforming Britain Must be Stopped and ensuring the country emerged from the recession with a healthy Susan Boyle able to cope with the challenges of globalisation.

A Downing Street spokesman said: "Do you think my CV should be justified or aligned left? And what about fonts? I think Times Roman makes me come across as mature and professional."

Ballack To Hurl Venom At Referees For Another Year 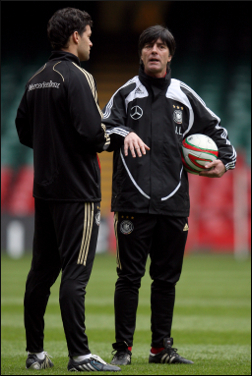 CHELSEA striker Michael Ballack has signed a one-year extension to his abuse-hurling contract, the club has confirmed.

Incoming coach Brian Ancelotti said he was delighted, insisting that with Ballack, John Terry and Didier Drogba, Chelsea would continue to field the most reviled bunch of overpaid, whining bitches in the Premier League.

He added: "Michael has all the experience of berating poorly-paid officials that I could hope for.

"And despite his age he can still track a referee for 60 yards up the pitch to spit phlegm-sodden obscenities right in his eyes."

Ancelotti said he hoped to bring a fresh approach to ref-baiting at Stamford Bridge adding: "In England, coaches still obsess about foul-language work rates, while on the continent the focus has been on developing a more inventive form of sewer-mouthed intimidation."

Ballack, who has worked under five managers at Chelsea said he was looking forward to a period of stability, adding: "Over the last 18 months I have not known whether I'm supposed to call the referee a tit, a ballbag or a monkey-brained cocksucker."

Premier League agent Bill McKay said: "The battle to secure the services of the most abusive pricks in football just seems to start earlier every year, doesn't it?"