'Go To Work On An Egg' Advert Banned For Safety Reasons

THE Health and Safety Executive has vetoed the classic 'Go to Work on an Egg' commercial amid fears commuters could injure themselves while trying to sit on their breakfast.

Officials said that as people were now much more stupid there was a greater risk of injury as they tried to climb on top of a medium-sized hen's egg every morning.

A spokesman said: "People obey orders from television without question, therefore the potential for carnage is unthinkable.

"If this advert was allowed to go ahead, accident and emergency departments would be filled with people suffering from back, hip and neck injuries caused by the incorrect mounting of eggs."

The British Egg Council insisted that going to work on an egg was simply one of a range of options and that consumers could also use the egg to work from home.

The Advertising Standards Agency said it accepted the expert health and safety advice but stressed that adults could still eat up to 125 eggs a day with no ill effects.

Ministers Unveil Plans For 'Road' Between Edinburgh And Glasgow 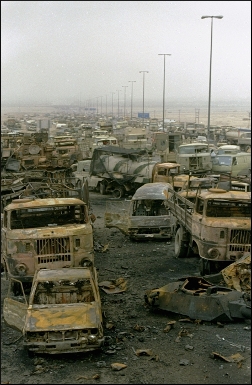 SCOTLAND'S transport system is to be revolutionised with the construction of the first 'road' between Scotland's two major cities.

For years travellers have been forced to negotiate a series of farm tacks, tow paths and gravel tips.

But after extensive research the Scottish Executive has now approved plans for a futuristic 'road' or 'motorway'.

A Scottish Executive spokesman said: "We realised that other European countries have roads between major population centres and it seems to work very well."

The new 'road' will be constructed primarily of tarmac and will have white painted lines to differentiate between lanes.

The spokesman added: "There will be a low fence in the middle for safety reasons as some vehicles may now be able to reach speeds of 30 or even 35 miles per hour.

"We've gone for three lanes in each direction. We looked at having two lanes each way but soon realised that was completely and utterly insane."

But the Executive has also rejected calls for a floating 'bullet train' across the central belt. The spokesman said: "It looks good on paper but in reality it means sitting next to people from Falkirk."