AMERICANS can urinate on our dead bodies as much as they feel like, the Taliban said last night.

The laid-back Afghan militia insisted footage of three US marines desecrating the corpses of Taliban fighters was ‘no biggie’.

“It’s just three guys having a laugh at the end of a hard day’s work. Hey, we know the feeling and we’re totally cool with it.”

He added: “The idea that muslims all over the world would somehow get all worked up and then swear vengeance, even if it must be delivered via the exploding undergarments of a glorious martyr, is so totally wide of the mark.

“Where did you get the idea that we were all so uptight? Chill. Everything is very groovy.”

US Marine Captain Bill McKay said: “It’s really nice to be at war with people who are just so easy going.

“I can’t speak for the whole US armed forces, but I know that if I had seen a video of Taliban peeing on dead marines, I’d be pretty cheesed off.”

He added: “Looks like our enemies can still teach us a thing or two about not taking life too seriously.”

Everyone to start supporting Barnet 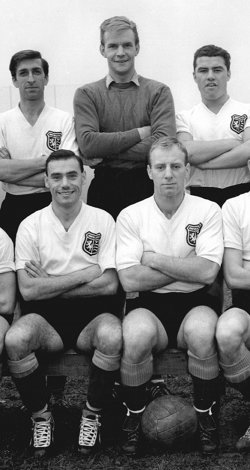 FOOTBALL supporters are to switch their allegiance to a team whose scumbags they have never heard of.

Third division club Barnet FC will prepare for the influx of several million supporters by borrowing some folding seats from a nearby church and ‘muddling through’.

Fan Martin Bishop said: “As far as I know, none of Barnet’s squad have put their penis into any of my relatives or blacked up recently, so I have no reason to detest them, as yet.

“I will miss supporting players that have some nominal control over where the football goes and looking at a pitch with grass on it, but it’s a small price to pay compared to the mental energy I have been expending inventing imaginative tortures for eleven people I’ve never met.”

Experts predict it will take Barnet’s 17 million new fans approximately three months to start loathing aspects of their new team, probably after an incident outside a nightclub involving a watermelon, a 17 year-old girl and an innocent cat.

Footballologist Wayne Hayes said: “The critical mass for arsehole footballers – the number past which some form of dickery will present itself – is four, so Barnet should contain about six people you wouldn’t trust to sleep in your shed.”

Bishop added: “I’m sure that before too long one of them will say something horrible to Park Ji-Sung, but in the meantime ‘Come on you badgers!’.

“Have I got that right?”