BORIS Johnson has unveiled plans to build a 140 mile bridge that will link Calais, central London and a new airport on a man-made island in the Thames estuary.

The foreign secretary said the Rudyard Kipling Bridge, which will tower magnificently over the Kent countryside, would cost no more than £580bn and be the ‘envy of the world’.

Johnson added: “At its highest point the Kipling Bridge will be 1000m tall, forming a triumphant concrete arch over central London and offering fantastic views of our cherished financial services industry.

“There will be massive, spiralling ramps coming off the bridge straight into Charing Cross so that French people in their dreadful cars can drive from Paris to central London without any traffic lights.

“When it reaches the Emirates Stadium, the bridge will make a sharp right turn and continue across north London and the southern reaches of Essex before arriving at the Paul Dacre International Airport on a giant island made of recycled plastic bags.”

Johnson said the project would be funded through a PFI contract run by Carillion and Woolworths. 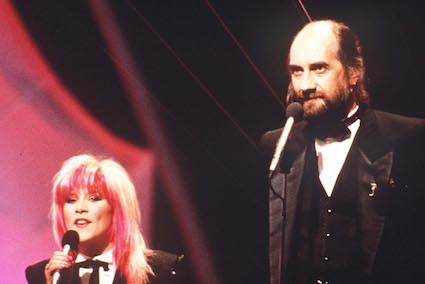 The awards will take place in Trump Tower tonight with no bands playing and a ‘bring your own bottle’ drinks policy.

Trump said: “My decision to ask Mick and Samantha to host the awards is one of the 10 greatest decisions ever made. You can look it up.

“They have always worked so well together, the chemistry is amazing. The whole thing is going to be so professional and classy. So classy.”

A insider from the show added: “We’ve made the awards themselves very small so they don’t make anyone’s hands look small.”