PRISON inmates have set up their own political party in preparation for getting the vote.

The Shawshank Party will campaign on issues such as the introduction of non-slip soap in prison showers, more top bunks and the legalisation of all forms of crime.

Party leader Roy Hobbs said: Every year, crime blights the lives of thousands of people convicted of doing it, as well as placing pressure on public services like the bastard coppers who nicked me.

Our plan is to eradicate crime by making it legal. For example, theft will be reclassified as just borrowing something for a bit, while murder will become unavoidable life-shortening.

We are also concerned about wider issues such as the dire state of the economy, specifically consumer confidence. Theres little point in burgling someones house if all theyve got is a portable telly and some Elizabeth Duke jewellery from Argos.

Then there are the problems faced by young people, many of whom cant afford to buy their first ounce of cocaine to get on the dealing ladder.

Prison inmate Wayne Hayes said: Ill be voting for the Shawshank Party. I think theyve got some really good policies on immigration, the EU and being allowed to brew toxic hooch from potato peelings.

Roy Hobbs said: 2015 could really be the breakthrough election for us. Im a convicted paedophile, but my popularity rating is still 26% higher than Nick Clegg’s.

Boris Johnson set for US presidency 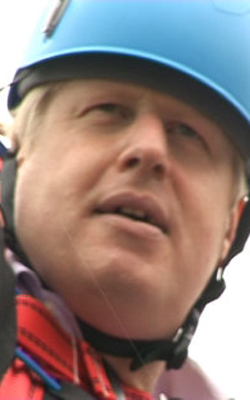 NEWLY-EMERGED presidential candidate Boris Johnson has surged ahead in US opinion polls, and should soon be running the world.

Johnson shocked the world by announcing his intention to run on last night’s Letterman Show, when he crashed onto the set riding a penny farthing.

After colliding his outlandish bike into the host’s desk and ending up dangling slapstick-style from a lighting rig, Boris announced: “I’d be quite up for a crack at this president thing, sounds like a wheeze.

“I’d have to watch the old red button though, if I put my cup of tea on it we’d all go boom!”

The power of Johnson’s bumbling charm is such that all election rules have been waived to permit the London’s mayor’s presidential candidacy. Boris is standing as an independent candidate with no policies other than to have a smashing time.

Less than 12 hours after entering American politics, he has a 94% poll lead.

US voter Tom Logan said: “He’s like a cross between Hugh Grant and an albino polar bear. Also he lives in Downton Abbey, it’s almost too amazing.”

Former Republican Emma Bradford said: “What this country badly needs is croquet, and to become like an imaginary version of pre-war England. And although I’m not 100% sure what Boris’s vision is, I’m fairly sure it’s along those lines.”

Meanwhile Obama looks increasingly like a man who just wants to pack it all in and start a provincial cake shop, while the Republicans have alienated most of humanity by focusing on the somewhat niche ‘rapist vote’.