BRITAIN is in the hands of a Huhneless government.

Officials warned that Britain is now facing some new hell following the resignation of climate secretary Brian Huhne after he was charged with perverting the course of his first marriage.

A Downing Street spokesman said: “The last thing we need now is for people to go mental, but there’s no blueprint for a properly functioning government that has been so suddenly un-Huhned.”

Across Britain, children were sent home early from school and supermarkets posted armed guards on their roofs.

Helen Archer, a sales manager from Stevenage, said: “I have no idea who you’re talking about.”

But as Twitter prejudiced Mr Huhne’s trial 714 times a second, the government stressed its energy policy will remain the same because the Conservative Party does not have a majority, before stressing it is baffled as to why people still cannot understand how this works.

Meanwhile researchers who do not believe in the climate have confirmed a definitive link between alleged speeding point shenanigans and solar panel feed-in tariffs.

Experts at Delingpole University claim to have proved how Mr Huhne’s impending criminal trial is the direct result of years of dishonest carbon reduction opinions.

Using state-of-the-art computer models they found that if Mr Huhne had continued advocating renewable energy he would eventually have driven his car into the middle of a nursery school and asked whichever woman he was sleeping with at the time to take the blame.

Professor Roy Hobbs said: “There is now a consensus that most people who believe in global warming will eventually be charged with perverting the course of justice. Or murder.

“Conversely, climate disbelief reduces the likelihood of criminal charges by 83% and even if a sceptic was somehow charged there is a mountain of data showing they would obviously be the victim of a devillish conspiracy.

“It’s a great day for science.” 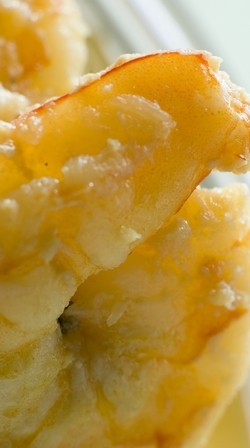 MARINE biologists from Scotland have discovered, deep-fried and eaten the world’s biggest prawn.

The creature was discovered seven kilometres down off the coast of New Zealand by a team from Aberdeen University dedicated to searching the world’s oceans for strange and exotic new life forms to cook in batter.

The crustacean had a pre-fried length of 34cm, but shrank to just under 20cm after 12 minutes in a regulation fryer.

Team leader, Dr Alan Jamieson, said: “We were very keen to see how a creature from such a dark, cold and high pressure environment would react in very hot fat.

“It’s thoracic structure is quite unlike anything we have encountered so far and absolutely delicious.

“We’re now going to experiment with different batter recipes to see how that affects the cell structure’s texture and consistency.

He added: “We’ve no idea how many are down there but we’ve eaten 15 of them so far.”

The new discovery is the second largest made by the team after the Marianas Sea Sausage, which at six foot three inches remains the longest thing eaten with brown sauce in a boat.