Sainthood For Woman Who Put Chocolate On Hobnobs

THE Pope is being urged to confer sainthood on the Scottish biscuit maker who first had the idea of putting chocolate on a HobNob.

Devout Catholic Margaret Sinclair implored her employers at McVities to coat the underside of their crunchy, oaty biscuits with a layer of milk chocolate after a experiencing a vision of the Virgin Mary.

The Holy Mother appeared to Sinclair in Easter 1920 when she was having a cup of tea at home in Edinburgh with an original HobNob and a small, hollow chocolate egg.

Cardinal Keith O'Brien, leader of the Catholic Church in Scotland, said: "At first she was sore afraid, but Mary said 'hush child', took the egg from her and gently smoothed it into the base of her biscuit, before using a small cake fork to create that distinctive ripple effect."

Sinclair would be the first biscuit maker to be canonised since 1905, when the French peasant girl Bernadette Soubirous was made a saint for inventing the Breakaway in 1858.

However, the move is likely to be attacked by the followers of Henry Brubaker, inventor of the Penguin, whose canonisation remains on hold 50 years after his death.

Catholic academic Dr Bill McKay said: "It could be argued that the chocolate HobNob, while certainly very appetising, is really little more than a chocolate digestive made from oats.

"The Penguin, however, has a chocolate cream filling, sandwiched between two chocolate flavoured biscuits, which are then enveloped by a delicious milk chocolate vestment.

"Did Jesus not say, 'if you are to be of chocolate, then be entirely of chocolate'? I think you'll find he did."

Paul Mccartney Has Been Dead Since 1966, Claims Heather 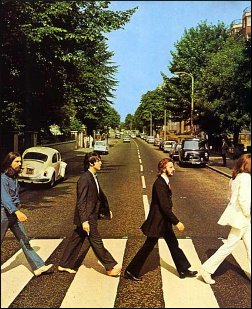 PAUL McCartney was killed in a car crash more than 40 years ago and replaced with a hypnotised doppelganger, his former wife claimed last night.

Heather Mills said the Beatles' later albums were littered with clues which revealed that the man known to millions as Sir Paul McCartney is actually a pipe-fitter called Ian.

She told GMTV: "If you look very closely at the cover of Sergeant Pepper you can see that Paul McCartney is, in fact, a total bastard."

According to Mills, the cover shows the Beatles standing over a grave covered by an elaborate floral wreath. "If you rearrange the letters it spells 'Paul is a tight-fisted shit'."

Mills also claimed that when I am the Walrus is played backwards, the phrase 'Paul McCartney is a total bastard' can be heard 'as clear as day'.

She added: "He's nothing more than a second rate look-a-like that Brian Epstein picked up in a Blackpool snooker hall.

"The reason he's only got £400 million is 'cause he has to pay hush money to Ringo Starr and Jane Asher. Not that she needs it, the cakey-faced bitch."

The former glamour model and charity campaigner said that within a few weeks of the couple's first date, she released he was, in fact, dead.

Mills also dismissed claims she had not donated money to charity, insisting her accountant had 'ticked the wrong box' on her tax return.

She added: "Unfortunately he ticked the little box that says 'spent it all on handbags and fortune tellers'."