Carroll starts against Newcastle to remind him of his job

ANDY Carroll will play for Liverpool against Newcastle this weekend in the hope it will trigger memories of his former behaviour.

Since his move to Liverpool, the semi-tame £35M ponytail­-stand has struggled to remember what he used to do on Saturdays in between getting out of bed and getting incredibly drunk.

Anfield staff have had to shoo him away from the ticket booths and burger stalls, where he was caught trying to put on an apron, as Carroll continues his confused search for meaning.

Liverpool manager Kenny Dalglish said: “Every Friday night for the first three months we would find him near the Pier Head, making a keening noise for the Toon.

“Nevertheless, we’re hoping that in 90 minutes he can re­grasp the rudiments of a sport he’s been playing since he was a foal and reduce my looking the twat by enough of a margin to explain the whole Jordan Henderson confusion.”

Carroll will be transported to the Two Tracksuits For £10 stadium in Newcastle in a soundproofed box to stop him breaking free and galloping amongst his herd along the Tyne Quayside demanding tits be outed for unspecified lads.

Dalglish is hoping that the sight of several goals inevitably sailing into Liverpool’s net will awaken some primal urge in Carroll to make his £8M-worth of leg do what it used to as a matter of instinct.

Assistant manager Steve Clarke said: “We used to rub the goal net with a piece of Dirk Kuyt’s bedding to entice him, so I’m sure it’ll work with Andy so long as there’s no scent of skank in the crosswind to confuse him.” 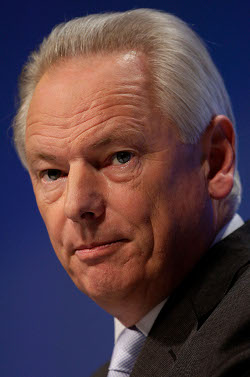 GOVERNMENT warnings of a fuel shortage have proved to be uncannily accurate.

Within hours of Francis Maude telling everyone to put a gun turret on their garage, petrol stations reported long queues of terrified people offering their children in exchange for a fill-up.

Mr Maude said: “I got a right load of shit from everyone yesterday but it turns out I was absolutely spot on.

“But will they apologise? Will they fuck.”

The cabinet office minister admitted his fuel shortage prediction was based on an educated guess, but denied strongly that it was a fluke.

He added: “Watch this.

“I think there’s going to be a milk shortage.”

Mr Maude was then forced to dive out of the way as four million people stampeded towards the nearest Asda, stripping it of milk as if it was a goat in a piranha tank.

As the dust settled, Mr Maude continued: “It’s weird isn’t it? It’s like I’m totally in the ‘zone’.

“Let’s try it with pasties.”