Knighthoods For Entire Cast Of 'Heartbeat'

THE cast of Yorkshire police drama Heartbeat has topped the bill in this year's Queen's Birthday honours list.

The entire ensemble, including Joe McFadden, Derek Fowlds and Tricia Penrose, have all been made Knights of the British Empire 'for Services to Being in Heartbeat'.

Fowlds, the longest serving cast member, is now the UK's most honoured thespian, following his CBE for Services to Being the Guy Who Wasn't Nigel Hawthorne in Yes Minister.

The list also included long-overdue recognition for veteran entertainer Des O'Connor who has been named  the new Archbishop of Canterbury.

O'Connor was recognised for his services to Morecambe and Wise routines and attending Variety Club luncheons and charity golf matches.

Liverpudlian smut-mouth cross-dresser Lily Savage has been made the 14th Duke of Bedford for Services to Jokes About Vaginal Thrush.

Meanwhile roly-poly girl next door Victoria Wood OBE was awarded her third CBE for having a really, really great personality.

Tony Blair, the chief executive of The Tony Blair Company, was offered a knighthood but turned it down after he was advised there was no money in it.

Bruce Forsyth was again told to go fuck himself.

Europe Destroyed By Curse Of The Leprechaun 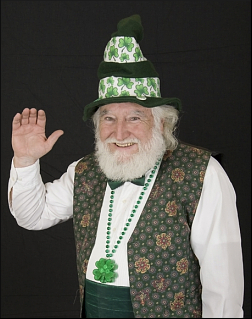 EUROPE lay in tatters last night, ravaged by the strongest leprechaun curse in over a decade.

Little people across the Emerald Isle drank whiskey, smoked pipes and danced jig after jig late into the night in celebration of their successful spell.

The savage curse was placed by Finnan O'Flaherty, a grade six leprechaun from County Kerry.

He said: "Oi be tellin' ye now, by the light of a full Spring moon, ye'll not be ratifyin' a treaty that leads to structural reforms of the Council o' Ministers agricultural sub-committee.

"Oi'll be skippin' down Killarney high street with a daisy in me cap before I'd be allowin' such a passage of affairs."

O'Flaherty said he added extra potency to the evil charm by drinking a special brew of cowslip and dandelions, chased down with a half-pint of Bacardi and coke.

But the issue has led to deep divisions within the leprechaun community with many little people claiming the curse could backfire and destroy the country's bottomless pot of shiny European gold.

Ireland's biggest-selling leprechaun newspaper the Killarney Bucket, last night devoted its front page to a strongly-worded attack on the curse, under the headline, 'O'Flaherty, ya great fuckin' eejit!'.